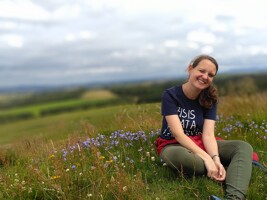 Outside humans, true agriculture was previously thought to be restricted to social insects farming fungus. However, obligate farming of plants by ants was recently discovered in Fiji, prompting a re-examination of plant cultivation by ants. Here, we generate a database of plant cultivation by ants, identify three main types, and show that these interactions evolved primarily for shelter rather than food. We find that plant cultivation evolved at least 65 times independently for crops (~200 plant species), and 15 times in farmer lineages (~37 ant taxa) in the Neotropics and Asia/Australasia. Because of their high evolutionary replication, and variation in partner dependence, these systems are powerful models to unveil the steps in the evolution and ecology of insect agriculture.

Crop wild relatives (CWRs) have the capacity to contribute novel traits to agriculture. Given climate change, these contributions may be especially vital for the persistence of perennial crops, because perennials are often clonally propagated and consequently do not evolve rapidly. By studying the landscape genomics of samples from five Vitis CWRs (V. arizonica, V. mustangensis, V. riparia, V. berlandieri and V. girdiana) in the context of projected climate change, we addressed two goals. The first was to assess the relative potential of different CWR accessions to persist in the face of climate change. By integrating species distribution models with adaptive genetic variation, additional genetic features such as genomic load and a phenotype (resistance to Pierce’s Disease), we predicted that accessions from one species (V. mustangensis) are particularly well‐suited to persist in future climates. The second goal was to identify which CWR accessions may contribute to bioclimatic adaptation for grapevine (V. vinifera) cultivation. To do so, we evaluated whether CWR accessions have the allelic capacity to persist if moved to locations where grapevines (V. vinifera) are cultivated in the United States. We identified six candidates from V. mustangensis and hypothesized that they may prove useful for contributing alleles that can mitigate climate impacts on viticulture. By identifying candidate germplasm, this work takes a conceptual step toward assessing the genomic and bioclimatic characteristics of CWRs.

Premise Historical biogeography of ferns is typically expected to be dominated by long-distance dispersal, due to their minuscule spores. However, few studies have inferred the historical biogeography of a large and widely distributed group of ferns to test this hypothesis. Our aims are to determine the extent to which long-distance dispersal vs. vicariance have shaped the history of the fern family Blechnaceae, to explore ecological correlates of dispersal and diversification, and to determine whether these patterns differ between the northern and southern hemispheres. Methods We used sequence data for three chloroplast loci to infer a time-calibrated phylogeny for 154 out of 265 species of Blechnaceae, including representatives of all genera in the family. This tree was used to conduct ancestral range reconstruction and stochastic character mapping, estimate diversification rates, and identify ecological correlates of diversification. Key results Blechnaceae originated in Eurasia and began diversifying in the late Cretaceous. A lineage comprising most extant diversity diversified principally in the austral Pacific region around the Paleocene-Eocene Thermal Maximum. Land connections that existed near the poles during periods of warm climates likely facilitated migration of several lineages, with subsequent climate-mediated vicariance shaping current distributions. Long-distance dispersal is frequent and asymmetrical, with New Zealand/Pacific Islands, Australia, and tropical America being major source areas. Conclusions Ancient vicariance and extensive long-distance dispersal have shaped the history of Blechnaceae in both the northern and southern hemispheres. The exceptional diversity in austral regions appears to reflect rapid speciation in these areas; mechanisms underlying this evolutionary success remain uncertain.

We analyzed the geographical distribution of Habromys species based on distributional data from museum specimens, web databases, and literature. We recorded species-presence data of each species in 0.5° × 0.5° grid cells and biogeographic provinces in Mexico and Central America. We analyzed the association between vegetation types and land use. We carried out species distribution models of most species of Habromys and those tree species frequently harboring these mice, finding a high distributional congruence among mice and trees. Species of Habromys occur throughout the montane systems of Mexico and northern Central America, so they can be considered characteristic elements of the Neotropical montane cloud forests. All species of the genus occur in Mexico, whereas Guatemala and El Salvador have only one species. Although all species of Habromys are highly restricted and considered rare species, only one (H. simulatus) is currently protected by Mexican laws. We assigned two species to a high and four to the critical conservation risk. Habromys species contribute to the recognition of Mesoamerica as a biodiversity hotspot.

The pantropical genus Dalbergia includes more than 250 species. Phylogenetic studies of the group are scarce and have only included two or three species distributed in Mexico. We obtained herbarium samples of Mexican, Central American, and South American species (sourced from MEXU). In addition, sequences of GenBank accessions were used to complement the study. Using internal transcribed spacer (ITS), the matK and rbcL sequences from 384 accessions comprising species from America, Asia, and Africa were sampled to evaluate phylogenetic relationships of Mexican species and infrageneric classifications based on morphological data. Phylogenetic analyses suggest that the genus Dalbergia is monophyletic and originated in South America. The species distributed in Mexico are not a monophyletic clade but are divided into four clades with affinities to South American and Asian species clades. There is no correlation between geography and large-scale phylogeny. The estimated ages of the Mexican and Central American clades ranged from 11.32 Ma (Dalbergia granadillo clade) to 1.88 Ma (Dalbergia ecastaphyllum clade). Multiple long-distance dispersal events should be used to explain the current genus distribution.

The consequences of rising temperatures for trees will vary between species based on their abilities to acclimate their leaf thermoregulatory traits and photosynthetic thermal tolerances. We tested the hypotheses that adult trees in warmer growing conditions (1) acclimate their thermoregulatory traits to regulate leaf temperatures and (2) acclimate their thermal tolerances such that tolerances are positively correlated with leaf temperature, and that (3) species with broader thermal niche breadths have greater acclimatory abilities. To test these hypotheses, we measured leaf traits and thermal tolerances of seven focal tree species across steep thermal gradients in Miami’s urban heat island. We found that some functional traits varied significantly across air temperatures within species. For example, leaf thickness increased with maximum air temperature in three species, and leaf mass per area and leaf reflectance both increased with air temperature in one species. Only one species was marginally more homeothermic than expected by chance due to acclimation of its thermoregulatory traits, but this acclimation was insufficient to offset elevated air temperatures. Thermal tolerances acclimated to higher maximum air temperatures in two species. As a result of limited acclimation, leaf Thermal Safety Margins (TSMs) were narrower for trees in hotter areas. We found some support for our hypothesis that species with broader thermal niches are better at acclimating in order to maintain more-stable TSMs across the temperature gradients. These findings suggest that trees have limited abilities to acclimate to high temperatures and that thermal niche specialists may be at a heightened risk of thermal stress as global temperatures continue to rise.

Aim The relationships between biome shifts and global environmental changes in temperate zone habitats have been extensively explored; yet, the historical dynamics of taxa found in the tropical rain forest (TRF) remain poorly known. This study aims to reconstruct the relationships between tropical rain forest shifts and global environmental changes through the patterns of historical biogeography of a pantropical family of monocots, the Zingiberaceae. Location Global. Taxon Zingiberaceae. Methods We sampled DNA sequences (nrITS, trnK, trnL-trnF and psbA-trnH) from GenBank for 77% of the genera, including 30% of species, in the Zingiberaceae. Global fossil records of the Zingiberaceae were collected from literatures. Rates of speciation, extinction and diversification were estimated based on phylogenetic data and fossil records through methods implemented in BAMM. Ancestral ranges were estimated using single-tree BioGeoBEARS and multiple-trees BioGeoBEARS in RASP. Dispersal rate through time and dispersal rate among regions were calculated in R based on the result of ancestral estimation. Results The common ancestor of the Zingiberaceae likely originated in northern Africa during the mid-Cretaceous, with later dispersal to the Asian tropics. Indo-Burma, rather than Malesia, was likely a provenance of the common ancestor of Alpinioideae–Zingiberoideae. Several abrupt shifts of evolutionary rates from the Palaeocene were synchronized with sudden global environmental changes. Main conclusions Integrating phylogenetic patterns with fossil records suggests that the Zingiberaceae dispersed to Asia through drift of the Indian Plate from Africa in the late Palaeocene. Formation of island chains, land corridors and warming temperatures facilitated the emigration of the Zingiberaceae to a broad distribution across the tropics. Moreover, dramatic fluctuations of the speciation rate of Zingiberoideae appear to have been synchronized with global climate fluctuations. In general, the evolutionary history of the Zingiberaceae broadens our understanding of the association between TRF shifts in distribution and past global environmental changes, especially the origin of TRF in Southeast Asia.

The early Eocene (∼56‐48 million years ago) is characterised by high CO2 estimates (1200‐2500 ppmv) and elevated global temperatures (∼10 to 16°C higher than modern). However, the response of the hydrological cycle during the early Eocene is poorly constrained, especially in regions with sparse data coverage (e.g. Africa). Here we present a study of African hydroclimate during the early Eocene, as simulated by an ensemble of state‐of‐the‐art climate models in the Deep‐time Model Intercomparison Project (DeepMIP). A comparison between the DeepMIP pre‐industrial simulations and modern observations suggests that model biases are model‐ and geographically dependent, however these biases are reduced in the model ensemble mean. A comparison between the Eocene simulations and the pre‐industrial suggests that there is no obvious wetting or drying trend as the CO2 increases. The results suggest that changes to the land sea mask (relative to modern) in the models may be responsible for the simulated increases in precipitation to the north of Eocene Africa. There is an increase in precipitation over equatorial and West Africa and associated drying over northern Africa as CO2 rises. There are also important dynamical changes, with evidence that anticyclonic low‐level circulation is replaced by increased south‐westerly flow at high CO2 levels. Lastly, a model‐data comparison using newly‐compiled quantitative climate estimates from palaeobotanical proxy data suggests a marginally better fit with the reconstructions at lower levels of CO2.