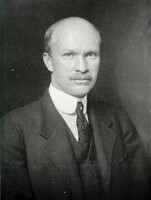 Crop wild relatives (CWRs) have the capacity to contribute novel traits to agriculture. Given climate change, these contributions may be especially vital for the persistence of perennial crops, because perennials are often clonally propagated and consequently do not evolve rapidly. By studying the landscape genomics of samples from five Vitis CWRs (V. arizonica, V. mustangensis, V. riparia, V. berlandieri and V. girdiana) in the context of projected climate change, we addressed two goals. The first was to assess the relative potential of different CWR accessions to persist in the face of climate change. By integrating species distribution models with adaptive genetic variation, additional genetic features such as genomic load and a phenotype (resistance to Pierce’s Disease), we predicted that accessions from one species (V. mustangensis) are particularly well‐suited to persist in future climates. The second goal was to identify which CWR accessions may contribute to bioclimatic adaptation for grapevine (V. vinifera) cultivation. To do so, we evaluated whether CWR accessions have the allelic capacity to persist if moved to locations where grapevines (V. vinifera) are cultivated in the United States. We identified six candidates from V. mustangensis and hypothesized that they may prove useful for contributing alleles that can mitigate climate impacts on viticulture. By identifying candidate germplasm, this work takes a conceptual step toward assessing the genomic and bioclimatic characteristics of CWRs.