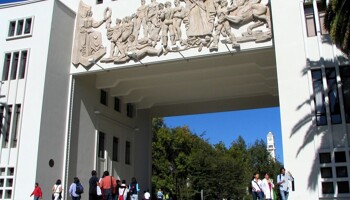 The present review investigates our current knowledge of the richness and distribution of coral species inhabiting diverse habitats in Chilean coastal and marine waters, including the oceanic islands. Information, such as the spatial-temporal coverage, taxonomic resolution, and bathymetry of species, was extracted from published articles, geodatabases, and unpublished data. Our analyses of these data highlight major gaps in knowledge on corals in Chile, indicating this region remains poorly studied. The results show that the previous studies focused mostly on coastal and shallow-water habitats, with the continental slope, oceanic islands, and seamounts remaining mainly unexplored. Furthermore, high coral species richness was observed in the Magellanic Province compared with the northern Intermediate Area and Peruvian Province, and the temporal distribution of occurrence records was discontinuous, with peaks observed for the years 1876–1877, 1960–1967, and 2001–2016. We also report a new location and an extension of the known geographic distribution for Bathycyathus chilensis. Despite the progress in scientific knowledge achieved in the last decades, coral research still suffers from significant knowledge gaps, especially of the deep-sea benthic biodiversity in Chile. Further exploration of Chilean coastal and marine waters is therefore necessary to increase the knowledge of the coral biodiversity of this vast region.

Sea pens are considered to be of conservation relevance according to multiple international legislations and agreements. Consequently, any information about their ecology and distribution should be of use to management decision makers. This study aims to provide such information about six taxa of se…

Mollusca is the largest marine phylum, comprising about 23% of all named marine organisms, Mollusca systematics are still in flux, and an increase in human activities has affected Molluscan reproduction and development, strongly impacting diversity and classification. Therefore, it is necessary to e…

Amphipod crustaceans are an essential component of tropical marine biodiversity. However, their distribution and biogeography have not been analysed in one of the world’s largest tropical countries nested in the Coral Triangle, Indonesia. We collected and identified amphipod crustaceans from eight s…

Spatial patterns of biodiversity are inextricably linked to their collection methods, yet no synthesis of bias patterns or their consequences exists. As such, views of organismal distribution and the ecosystems they make up may be incorrect, undermining countless ecological and evolutionary studies.…

The latitudinal gradient of increasing marine biodiversity from the poles to the tropics is one of the most conspicuous biological patterns in modern oceans.1, 2, 3 Low-latitude regions of the global ocean are often hotspots of animal biodiversity, yet they are set to be most critically affected b…

Phyllodocida is a clade of errantiate annelids characterized by having ventral sensory palps, anterior enlarged cirri, axial muscular proboscis, compound chaetae (if present) with a single ligament, and of lacking dorsolateral folds. Members of most families date back to the Carboniferous, although …

Species occurrence records provide the basis for many biodiversity studies. They derive from georeferenced specimens deposited in natural history collections and visual observations, such as those obtained through various mobile applications. Given the rapid increase in availability of such data, th…